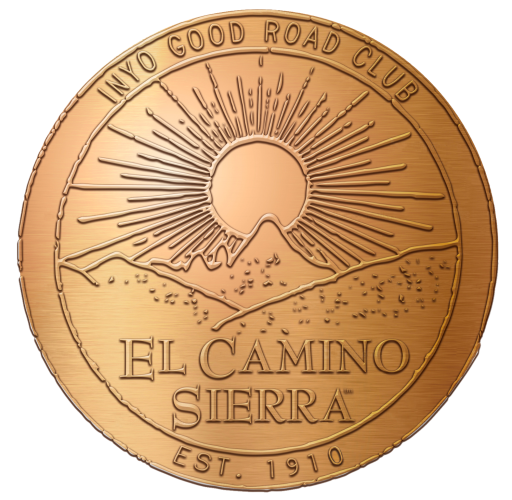 Inyo County is home to the Palisade Glacier, the largest glacier in the Sierra Nevada at 2.5 miles long, 1 mile wide and several hundred feet thick, and the southernmost glacier in the Western Hemisphere.

El Camino Sierra is the direct result of the tireless efforts of the Inyo Good Road Club to connect the county’s first “real” highway with the rest of the world. Establishing the El Camino Sierra was something an enterprising group of local residents saw as not just a necessity but a probable economic boon to a burgeoning tourist economy and thriving agricultural industry.

The same aesthetic wonders that currently bring thousands of visitors to the Eastern Sierra each year had begun enticing Southern California residents around the turn of the 20th century, but to get here meant a brutal, arduous journey. It was also costly and far more time-consuming than it needed to be for farmers, miners, and tradesmen to transport their goods to the blossoming Southern California markets via a tattered wagon trail.

As it happened, a nationwide campaign to develop paved roads for the benefit of rural communities – aptly named the Good Roads Movement – had been underway since the 1870s. While originally championed by bicyclists, the movement shifted its focus to automobiles as motorized transportation skyrocketed in popularity. “Car Culture” was first embraced in California in 1895, with automobiles replacing horses, wagons, even trains.

By the time those aforementioned, enterprising Inyo County residents began working in earnest to develop a proper route in and out of the county, approximately 7,000 automobiles were registered across the state. With the Good Roads Movement having fully arrived in California, local residents had the momentum and support they needed in their push for a paved Inyo County highway, and the 62-member Inyo Good Road Club was born on April 20, 1910.

The group’s lobbying and labor kicked into full gear. The 62-member club invited Governor James Gillett to join the Inyo Good Road Club and then got to work – with picks and shovels – to improve the dirt highway between Big Pine and Bishop. So impressed was Gov. Gillett that he accepted the membership, writing to the group: “I have watched with great interest, the action taken by the people in one county for good roads and I want to compliment them for doing so. The question of good roads is one of the most important that our state now has before it…”

A major milestone in the club’s efforts came just months later on August 31, 1910 when Gov. Gillett, accompanied by an all-star entourage, officially dedicated the highway in Inyo County as “El Camino Sierra” – a name coined by Inyo County Good Road Club Secretary W.G. Scott to give the group’s campaign pizzazz, even a sense of romanticism. The dedication ceremony was held at Fred Eaton’s farm in Big Pine, and included the unveiling of the very first El Camino Sierra sign. The Inyo Independent predicted in its September 2, 1910 edition, in reporting on the dedication, that El Camino Sierra “in years to come will probably be the most traveled highway in the West.”

Gillett’s visit included stops in Lone Pine, Independence, and Bishop, in addition to Big Pine. The Inyo Independent reported that during his various speaking engagements, the governor “spoke of the spirit of improvement he noticed throughout the valley … He told of the wonderful benefits to be derived from good roads. He spoke of the vast amounts of money that was poured into Europe every year for trips to the Alps and other places … and that these people would come here if the fact was only made known to the world, and that fact could be made known if the people here would realize it.”

Realize it they did, to the extent that the Inyo Good Road Club became one of the most active Good Road Clubs in the state, relentlessly lobbying for state money and arranging motor tours for legislators as the number of automobiles in California reached 1.9 million by 1929.

With support from the American Automobile Club and State of California, the Inyo Good Road Club spearheaded the monumental 1912 California Pasear Tour of these routes as an effort to promote the upcoming 1915 Pan Pacific Exhibition in San Francisco.

And while many others were involved in the development of a statewide highway system, the vision and drive of the Inyo Good Road Club served as a source for inspiration and emulation for similar efforts. It was the local, fervent belief that, if you build a road, they will drive on it – as well as residents’ enthusiastic willingness to grab a shovel and get to work – which convinced lawmakers to invest in these rural roads.

El Camino Sierra did indeed prove beneficial not just to Inyo County residents, but countless visitors – all of whom were unwittingly taking a step back in time as they enjoyed the convenience of a modern-era road. El Camino Sierra, after all, traces the same path forged by the Native Americans, and followed by gold-seekers, stage coaches, aqueduct wagons, freighters, mule skinners, farmers, ranchers, fishermen, and early tourists in successive generations.

Today, the route of El Camino Sierra is traced by U.S. Highway 395, which is a “good road” indeed, used by 350,000 motorists a day and millions each year.

Turns out the predictions made in regard to that fateful August day in 1910 came true:

“We wonder if early settlers of the Owens Valley … laid by their campfires and dreamed of the many eyes that would be turned to the beautiful valley bounded by the High Sierras – the range of mountains which in the near future will become the playground of tens of thousands every year … The visit of Governor Gillett and his party this week is, more than anything in the past, the signal for that transformation to come. The event, fathered by men who are doing their best to boost the valley under the title of the Inyo Good Road Club, marks a new epoch in the history of the valley” (Inyo Independent, September 2, 1910).